In Memory of
Adam David
Yankowsky
1992 - 2017
Click above to light a memorial candle.
Memorial Candle Tribute From
Brookings-Smith
"We are honored to provide this Book of Memories to the family."
View full message >>>
Memorial Candle Tribute From
Stafford Venema and his mom, Kathleen Rogers
"Dear Shelly, Stafford and I are beyond saddened to read of Adam's death in the p"
View full message >>>
Send Flowers
Menu

In the event that there is an error
in the information presented,
please contact the funeral
home by clicking here. 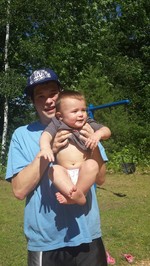 Adam attended Glenburn Elementary and All Saints Catholic School and he graduated from Bangor High School. He loved to cook and worked at Ground Round and most recently Dysart's in Hermon.

In addition to his parents he is survived by his brother and best friend Sean, his children Khloe Lynn and Hayden Allan David and their mom, his beloved girlfriend, Hillary Scovil. He is also survived by his grandmother Julie Taylor, his great grandmother Madeline Taylor, his grandfather Stanley Yankowsky and many aunts, uncles and cousins who loved him unconditionally.

Adam was predeceased by his grandfather, David Taylor Sr and his grand mother, Linda Ringuette. He will be sadly missed by his dogs, Benson and Maddie, who were by his side even at the end.

Adam was a kind soul, always giving from his own to help someone else. He suffered from a drug addiction and tried many times to quit. He was a good kid, loved to play basketball and had many games in the driveway with his dad, brother and a many number of his friends.

Adam will always be remembered for his quick wit, always making us laugh and the love he had for his children. Adam's life was hard but he fought the fight.

A Funeral Mass will be held 2:00 p.m., Thursday, August 10, 2017 at St. Paul the Apostle Parish, St. John’s Catholic Church, 207 York Street, Bangor, followed by a Rite of Committal at the Birch Grove Cemetery next to his home on the Merryman Rd in Glenburn. The family invites relatives and friends to share memories and refreshments at the Spectacular Event Center, 395 Griffin Road, Bangor, Maine 04401, immediately following the Mass.