To share your memory on the wall of Roger Dole, sign in using one of the following options:

Roger had a love for life and people. He never met a stran... Read More
HERMON- Roger Willis Dole, 93, passed away peacefully February 9, 2021. He was born November 30, 1927, in Hermon, the son of Arthur Sidney Dole and Marion Julia (Peabody) Dole.

Roger had a love for life and people. He never met a stranger, just a friend he had not met. He had many interests including trains, gardening and sports. Roger was the president of the Pine State Amateur Radio club for many years.

He was predeceased by Jean, his wife of 62 years, and their daughter, Edith Bemis.

A private graveside service will be held in the spring at Waugh Cemetery, Levant. Those who wish to remember Roger may make gifts in his memory to the Alzheimer’s Association, 383 US Route One, Suite 2C, Scaborough, ME 04074. Condolences to the family may be expressed at Brookingssmith.com
Read Less

We encourage you to share your most beloved memories of Roger here, so that the family and other loved ones can always see it. You can upload cherished photographs, or share your favorite stories, and can even comment on those shared by others.

Plant a Tree in Memory of Roger
Plant a tree 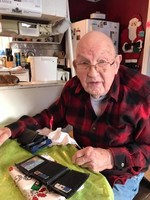