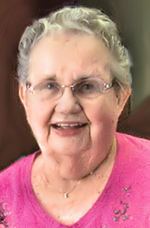 Phyllis graduated from Bangor High School in 1948 and went on to nursing school at Maine General in Portland. She became a registered nurse in 1951. After nurse’s training, she married Royce S. Chambers. During their 40 plus years together, Phyllis raised a family, and worked for many local hospitals, healthcare facilities, and healthcare organizations. Phyllis enjoyed knitting, crocheting, and getting together with friends on Saturday nights to play cards. In 1990, her husband Roy, passed away.

At a local church supper in late 1992, early 1993, Phyllis met her current husband, Richard “Dick” Thompson. Phyllis and Dick were married in 1993. They soon made camping and traveling their life. They wintered in Florida, summered in Maine, and traveled the United States many times in their RV.

In addition to her parents, she was predeceased by her sister, Gloria and father of her children, Roy. Surviving in addition to her husband, Richard Thompson, are her sons, Bruce Chambers of Boise, Idaho, David Chambers and wife, Vivian, of Seal Cove; daughter, Susan “Sue” Blackmore and husband, Steven, of Levant; step-children, Richard Thompson and wife, Mary, of Palm Harbor, Florida, Lynne Townsend and husband, Dan, of Charleston, Elizabeth Thompson of Bangor, Jeffrey Thompson of Bangor, and Dale Thompson and wife, Liz, of New Buffalo, Michigan; several grandchildren, great-grandchildren, nieces, and nephews.

The family would like to express their thanks and appreciation to St. Joseph’s Hospice; its nurses, Dana, Hannah, and Lisa; aides, Marilyn, Brenda, and Melissa from Occupational Therapy, and the aids/employees of Loving Touch in Home Care for the love and compassion shown to Phyllis and the family during the last few weeks.

A memorial service will be held 3:00 p.m. Saturday, May 25, 2019 at Brookings-Smith, 133 Center St., Bangor with Rev. Justin Howard, officiating. Those wishing to remember Phyllis in a special way may make gifts in her memory to the Bangor Humane Society, 693 Mt. Hope Ave., Bangor, Maine 04401. Condolences to the family may be expressed at BrookingsSmith.com