To share your memory on the wall of Tom Bowden III, sign in using one of the following options:

We encourage you to share your most beloved memories of Tom Bowden III here, so that the family and other loved ones can always see it. You can upload cherished photographs, or share your favorite stories, and can even comment on those shared by others.

Posted Sep 21, 2019 at 07:46am
So sorry to learn of Tom's passing. For more than 20 years my wife Joyce and I depended upon Tom to keep our furnace running and our home heated and he never let us down. Hunkered down on an overturned bucket in our cellar Tom would spin tales and share stories as he skillfully repaired whatever bit or piece was malfunctioning. As we both owned Ellis 20 skiffs Tom and I also swapped tricks of the boat maintainence trade and he turned me on to beaching my boat on a crab (strong sawhorse) for changing the oil and gearbox fluids. A friend built me a copy of Tom's crab 15 years ago and I am still using it to this day. From now on while waiting for the oil to drain I will always think of Tom, the great storyteller, who always arrived and departed with a smile on his face and never failed to extend a helping hand.
Comment Share
Share via:
JP

Posted Jun 04, 2019 at 07:47pm
I'm so sorry to hear this sad news. I was a client of his for many years and a friend as well. It was always a bright spot in my day if out paths happened to cross. Once he thought he had left a tool at my house and we got so engrossed in our conversation we almost forgot to go look for it. He was stalwart in all weathers and all situations, full of humor and good will, reliable and honest, wise and knowing. Altogether a splendid human being. My heartfelt condolences to Mrs. B and his many loved ones.
Comment Share
Share via:
JR

Posted Jun 03, 2019 at 11:45am
Tom was such a delight to spend time with. Lots of great stories, full of humor, sage advice. It saddens us greatly to not have his presence. Our condolences and good thoughts go out to his loved ones. John & Trisha Roths, DeGregoire Park, Bar Harbor
Comment Share
Share via:
MG

Posted May 31, 2019 at 06:23am
We will miss Mr. Bowden. Always gave us a warm greeting and a smile. A great man. Our condolences. Mike and Sherry Gallant
Comment Share
Share via:
SG

Posted May 30, 2019 at 05:50pm
We are truly sorry to hear of the loss of Tom. Our thoughts and prayers are with you and your family. Mike and Susan Geary
Comment Share
Share via: 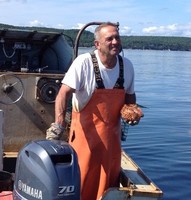