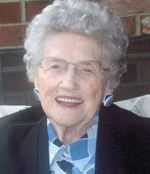 BANGOR – Virginia Winchester passed away May 25, 2020 at Ross Manor with her daughter at her bedside. She was born in Bangor on June 20, 1922, the third youngest of ten children of Thomas and Catherine (Steele) Higgins. Virginia was a devoted wife, mother, grandmother, and great-grandmother. She attended St. Mary’s Parochial School and graduated from John Bapst High School at age 16, with honor. She worked at W.T. Grant, and Atlantic and Pacific Tea Company before marrying Lawrence E. Winchester in 1944. They had two children, Patricia and Lawrence, Jr. Virginia was very active in both of her children’s activities in school while both were growing up. She did the typical babysitting for all of her grandchildren throughout the many years, she enjoyed this task most of all. Virginia was a very devoted Catholic. She was a life-long member of St. Mary’s Parish of Bangor. In 1961, she became president of St. Mary’s Sodality Council for two years. After her children finished their schooling her husband decided to start his own business in 1970. Virginia became the bookkeeper of the business for over 15 years. In 1985 her husband was forced to retire due to ill health, he passed away in 1987. Virginia stayed in Bangor for the next 33 years enjoying her extended family. In addition to her parents and husband, Virginia was predeceased by her son, Lawrence E. Winchester, Jr. in 2018; her nine siblings, Mary Connor, Kay Brooks, John Higgins, Thomas Higgins, Annie Henry, Alma Mourkas, Leo Higgins, George Higgins, and Richard Higgins. Virginia is survived by her daughter, Patricia Reed and husband, Dale of Orrington; grandsons, Donald Reed and wife, Libby of North Yarmouth; Christopher Winchester and wife, Jessica of Sanford; granddaughter, Kimberly Williamson and husband, Benjamin of Bath; daughter-in-law, Theresa Winchester; step-grandson, Brian Lee and wife, Andrea; and great-grandchildren, Samuel, Ethan, Emma, and Charlotte. The family would like to thank the doctors, nurses, and staff at Sylvia Ross and Ross Manor for their care, kindness and compassion given to mom over the years. The family also thanks Northern Light Hospice for the care and kindness given to Virginia and family. Due to Covid-19 concerns the services will be private for the family. There will be a gathering to celebrate Virginia’s life in September. Condolences to the family may be expressed at Brookings-Smith.com.