To share your memory on the wall of Esther Coffin, sign in using one of the following options:

Provide comfort for the family of Esther Coffin with a meaningful gesture of sympathy.

Print
Esther Joanne Coffin, 80, went to be with her Lord and Savior on Tuesday, January 21, 2020 at home. Esther was born in Milwaukee, Wisconsin, the daughter of the late John and Esther (Jessen) Graf.

She was a graduate of Moline High School... Read More
Esther Joanne Coffin, 80, went to be with her Lord and Savior on Tuesday, January 21, 2020 at home. Esther was born in Milwaukee, Wisconsin, the daughter of the late John and Esther (Jessen) Graf.

She was a graduate of Moline High School, Moline, IL then attended Apostolic Bible Institute in St. Paul, Minnesota for 1 year. Esther began her career as a bank teller for a short period of time before becoming a schoolteacher at the Apostolic Christian Academy in Brewer, Maine, where she was the reading teacher for 30 years. During her tenure at the Apostolic Christian Academy, Esther developed the reading program that the academy would follow throughout her career. She was an active member of the First Pentecostal Church, (formerly the First Apostolic Church), in Brewer. In 2016, Esther moved to Delaware, where she attended the Lighthouse Christian Center, Milford, Delaware. She loved to knit and crochet, enjoyed word find and word search puzzles as well as playing scrabble. Esther was a devout Christian and loved serving the Lord in every way throughout her life. Most important to Esther was her family, who she cherished with all her heart. In addition to her parents, she was preceded in death by her husband Dale W. Coffin in 1997, her son Terry Wayne Coffin in 1984 and two sisters Leona Jean Mitchell and Elizabeth “Betty” Martens.

She is survived by her two daughters Tammy K. Hayes and her husband Lee and Kathy L. Davis; two sons Darryl L. Coffin and his wife Melissa and Kevin D. Coffin and his wife Laurie; 14 grandchildren and 6 great grandchildren.
Funeral service will be held 12 PM, Saturday, February 1, 2020, at the First Pentecostal Church, 14 Parkway South, Brewer. Friends may gather with the family from 10 AM Saturday until the time of the service. Interment will be in the spring at Lakeview Cemetery, Hampden. Condolences to the family may be expressed at BrookingsSmith.com.
Read Less

We encourage you to share your most beloved memories of Esther here, so that the family and other loved ones can always see it. You can upload cherished photographs, or share your favorite stories, and can even comment on those shared by others.

Flowers were purchased and a memorial tree planted for the family of Esther Coffin. Send Flowers 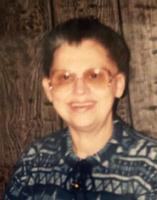