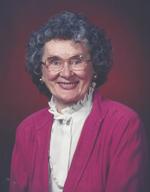 Throughout her career, Margaret taught science courses at many institutions, including Hamline University, Hamline Ashbury School of Nursing, Iowa State University, the University of Maine, and Old Town High School. Beginning in 1970, she taught advanced placement chemistry and biology courses at Bangor High School where she served as science department chair from 1979-86. There, she mentored many talented students who presented their work in multistate venues including the Westinghouse Science Talent Search and the University of New Hampshire’s Junior Science and Humanities Symposium. Upon her retirement in 1988, Bangor High School dedicated its new science wing to her. Margaret was revered by her students as a first-rate teacher who inspired them to excel and who cared deeply about their development as thinkers and as people.

Music formed an important part of Margaret’s life. In her youth, she played the clarinet, piano, and violin and she sang as an alto for over 70 years. She directed Orono United Methodist Church’s junior and youth choirs for 10 years and was an interim chorus director at Bangor and Old Town High Schools. For several summers, she was musical director for the Penobscot Valley Children’s Theater. As an alto, she sang in programs for local organizations, in the choirs of Orono’s United Methodist Church and Church of Universal Fellowship, and in the University of Maine’s Oratorio Society for 64 years. Margaret belonged to the American Association of University Women, Order of the Eastern Star, National Education Association, National and Maine Science Teachers Associations, New England Association of Chemistry Teachers, and Alpha Delta Kappa educational honor society. She was listed in Who’s Who of American Women. She served as a volunteer docent at the University of Maine’s Hudson Museum, and led meditation groups. Margaret was an avid writer of poetry and a voracious reader of history and natural history, accumulating an impressive collection of books. She was greatly concerned with gender equality and helping women secure previously unavailable professional opportunities.

Margaret married Frederick H. Radke on September 4, 1946, with whom she had five children: Kathryn Radke (Petrolia, CA); Frederick R. Radke (Portland, ME); Lori Bessette (Rochester, NY); Eileen Nokes (Dexter, ME); and Sharon Radke (Davis, CA). She was predeceased by her husband, parents, brothers Denn and Walter Hoffman, and one of her ten grandchildren, Thomas Nokes. She is survived by her children and their spouses; nine grandchildren; and four great-grandchildren (with two more on the way). A celebration of life service will be held at the Church of Universal Fellowship, Orono, on August 26 at 10am. Those who wish to remember Margaret in a special way may, in lieu of flowers, make gifts in her memory to the Professor Frederick H. Radke Award or to the Maine Summer Youth Music Thomas C. Nokes Endowment; both are administered by the University of Maine Foundation, Two Alumni Place, Orono, ME 04469-5792.