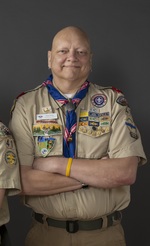 Hampden - Thomas David Turlo, Age 56, passed away peacefully July 29, 2019, in his home with his family by his side. He was born July 8, 1963 in Waterville, the son of August and Theresa (Boudreau) Turlo.
Tom attended Winslow schools and graduated from Winslow High School in 1981. He entered his beloved University of Maine in the spring of 1982 and meandered his way to graduation in the spring of 1997 with a degree in Civil Engineering. He made countless friendships along the way with that larger than life personality and crazy sense of humor.
Tom married Katherine Biscoe on September 10, 1994 and together they raised two children, Emma and Jonathan. Family vacations were often spent in Boothbay, and visiting the Turlo family camp in South China.
Tom was employed by Roof Systems of Maine for twenty years and was a highly respected figure in the construction industry.
Tom lived to serve others, and started his volunteer work by coaching and assisting the Maine Roadrunners, a quadriplegic rugby team for several years.
After his children came along, he began his long tenure with the Boy Scouts of America, serving as Troop Leader and Scoutmaster for Cub Scouts and Boy Scouts out of Troop 41 of Hampden. Tom was always “all-in” – 100% at whatever he did –everyone knew “Mr. T” was around as soon as you heard that booming voice or heard him blow his horn! He was a true Patriot in every sense of the word, from teaching boys respect and care for the American flag to his endless hours of making learning life skills fun. Countless young men benefited from Tom’s leadership, mentor skills, and careful guidance.
Tom’s proudest moment in Scouting was when he presented his son, Jonathan with his Eagle Scout pin in July of 2017.
Watching his daughter, Emma dance as a little girl right up through the dance team sidelines at the UMaine games was equally thrilling to him. He never missed a performance or game – regardless of his health.
Tom is survived by his loving wife, Kate; his daughter, Emma; son, Jonathan; his brothers, Bill, Pat, Tim; sisters, Anne, Claire, Mary; and mother, Terry.
A Celebration of a Life Well Lived will be held 11-3 pm., Saturday August 10, 2019, at Jeff’s Catering Banquet and Event Center, 15 Littlefield Rd, Brewer. At Tom’s request, please no black suits or dresses- colorful attire is encouraged.
Those who wish to remember Tom in a special way may make gifts in his memory to the Katahdin Area Council, Boy Scouts of America, PO Box 1869 Bangor, ME 04402-1869 or to the Lafayette Family Cancer Center c/o Northern Light Health Foundation, PO Box 931, Bangor, ME 04402-0931.

This obituary is protected by copyright by Hampden. Proudly Serving the Community of Hampden. Hampden is located in the state of Maine, United States.