To share your memory on the wall of William Thibodeau, sign in using one of the following options:

BANGOR - William Lee “Bill” Thibodeau, 88, passed away December 3, 2020, at his home in Bangor. Bill sadly succumbed to multiple health challenges he bravely faced over the past several years. He was born September 10, 1932, in Bangor, the son of William R. and Hilda E. (Hartley) Thibodeau.

Bill maintained his characteristic positive attitude throughout his recent ordeals. Bill was born and raised in Bangor. He always said he had the “run of the streets” growing up, and among his first jobs as a teenager was working in the original Eastern Maine Medical Center Hospital, as well as the old Bijou movie house. Bill greatly enjoyed his time in the Bangor School system, and met the love of his life, beautiful Anne Marie Lenfest, in seventh grade. He spent every birthday with Anne from that year forward to her death in 2011. Bill was an avid sports fan and played on the Bangor High School Basketball team in addition to running track. He never missed a Red Sox or New England Patriots game.

Bill and Anne were married at Essex St Baptist Church in September of 1951 and had three children together. They lived their entire lives in Bangor, except for a two-year stint in Houlton, Maine. Bill had a long successful career in the insurance industry, and owned and operated his own agency, the W.L. Thibodeau Agency, for many years before selling to Sargent, Tyler, & West, where he stayed on as a Vice President. Bill was known & loved by many for his infectious personality, smile, and his many jokes. He and best friend of over 70 years - Ollie Frati, recently experienced Franks Bakery Facebook fame for their morning visits and shenanigans there.

Bill had many friends in the Bangor area who provided loving support to Bill after his wife Anne passed away. He enjoyed spending time with family, playing golf, cards, and bowling, in addition to being a proud member of The Anah Shriners. He loved a great joke and was known to be a prankster. He especially loved his Thursday night poker games with “the boys,” and greatly missed this when they had to stop meeting.

In addition to his parents, Bill is predeceased by his wife, Anne and grandson, Derek Thibodeau.

Bill was ready to pass and was very much looking forward to being reunited with his beloved wife Anne.

A graveside service will be held at Mt. Pleasant Catholic Cemetery, at 11:00am, Tuesday, December 8, 2020. Please me mindful of others by practicing social distancing, wearing a face covering, and staff will be conducting contact tracing. Those wishing to attend the service remotely may do so at BrookingsSmith.com. A livestream service will begin at 11:00am.
Read Less

We encourage you to share your most beloved memories of William here, so that the family and other loved ones can always see it. You can upload cherished photographs, or share your favorite stories, and can even comment on those shared by others.

Posted Dec 07, 2020 at 12:54pm
Ted and I are both saddened to learn of Bill's passing. We always enjoyed seeing him while we all were walking the Mall in inclement weather! I had the pleasure of working with Bill many years ago at L.C.Tyler...what a great experience. Bill was always helpful and reassuring while I was learning the ropes! His grin and chuckle were always evident. It was a great group of people to work with and lasting friendships were formed. Bill was so proud of his children, as youngsters and then as young adults...I always loved catching up on them when we ran into each other. Love and prays of comfort for his family. Mary Sherwood
Comment Share
Share via: 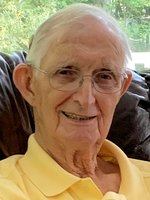