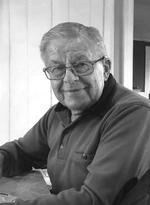 Theodore “Ted” Delano Rudnicki, 86, died unexpectedly on August 8, 2019. He was born on March 31, 1933, in Bangor, the son of Albin Rudnicki and Pauline (Zolenski) Rudnicki.
Ted graduated from Bangor High School in 1952. Not long after, Ted met Juliette “Julie” Simone Beland — “the best woman in Maine,” as he'd say — and the two were married June 2, 1956, at Saint Augustine Church in Augusta.
After marrying, Ted served in the U.S. Army as a paratrooper with the 82nd Airborne Division, and later worked at Maine Test Borings, retiring in 1998.
Ted prided himself on his home and family. He built the family's house with his father, Albin, right across the street from the farm where he was raised. As Ted's family grew, so did his house — he built extra rooms for the six children he had with Julie between 1958 and 1970.
The house has been the backdrop for countless holiday gatherings over the past 60 years. Many of his children and grandchildren held their weddings at the farm — in addition to their baby showers and anniversary celebrations. To this day, it is still the central meeting place of his family and is often found filled with his children, grandchildren, and great-grandchildren.
Ted built more than his home and family — he was a member of the crew that built the local portion of Interstate 95. A skilled woodworker and craftsman, Ted also built kitchen cabinets, custom furniture, cribbage boards and more for family members and friends throughout his life.
Ted was an active member of his community. A Maine Troop Greeter, he would welcome members of the armed forces as they arrived at Bangor International Airport — and even built and repaired a number of the memorabilia display cases in the Maine Troop Greeter's Museum. He enjoyed riding his snowmobiles and Goldwing motorcycle, and was a member of the Penobscot Valley Snowmobile Club and the Goldwing Road Riders, Bangor Chapter, for many years. Over their 63 years of marriage, Ted and Julie visited every one of the contiguous U.S. states on their Goldwing motorcycle — opting to travel to Hawaii by plane. Ted also enjoyed visiting friends and relatives, square dancing, playing card games, and golfing in Maine in the summer and Florida in the winter.
In addition to his parents, Ted is predeceased by his sister, Johanna Hill. Surviving in addition to his wife, Julie, are his children, daughter, Deborah and husband Roger Applegate, of Antioch, Tennessee; daughter, Catherine, of Palermo, and ex-husband Marvin Preyer, of Bangor; son, Gerard and wife Melanie, of Newburgh; daughter, Susan and husband John Mullins, of Searsport; son, Anthony and wife Shelley Rudnicki, of Fairfield; and daughter Lucille Rudnicki-Sevigny and partner Don Clark, of Orrington; eight grandchildren, Paul Preyer, Ginette Seamans, Alicia Bane, Marcus Preyer, Julie McDade, Anthony Rudnicki II, Shelby Rudnicki, and Maya Sevigny, and many great-grandchildren; his siblings, brother Marion Rudnicki, of Bangor; sister Felicia and husband Don Wiswell, of Orrington; brother Karl and wife Suzan, of Carmel; sister Pauline and husband Richie Neville, of Bangor; sister Frances Beland and husband Norman, of S. Windsor, Connecticut; sister Rosalia and husband Ronald Adams, of Bangor; sister Helena and husband Peter Bosse, of Milford; brother James and wife Bernadette, of Glenburn; brother A. John Rudnicki, of Glenburn, and many nieces and nephews.
A Funeral Mass will be held 11 AM, Wednesday, August 14, at St. Paul the Apostle Parish, St. John's Catholic Church, 217 York Street, Bangor. The family invites relatives and friends to share conversation, lunch and refreshments in the parish hall following the Funeral Mass. In lieu of flowers, donations may be made in Ted's memory to Disabled American Veterans, PO Box 14301, Cincinnati, OH 45250-0301. Condolences to the family may be expressed at www.BrookingsSmith.com