To share your memory on the wall of Christina Holcomb, sign in using one of the following options:

Provide comfort for the family of Christina Holcomb with a meaningful gesture of sympathy.

Chris was a retired CNA who always treated her patients like family. She was also the consummate homemaker and loved to prepare large meals for guests. She was always asking “wouldn’t you like more of this or that.” She enjoyed cooking, playing scrabble or dominoes with friends, and playing the piano. She was an active member of the Veazie Congregational Church, participating in many of the church suppers.

Chris especially loved Scotland and the UK, since her mother was from there and all her relatives on her mother’s side still live there. Chris had visited there several times as a child, and was fortunate to have a chance to live there for over three years while her husband was stationed there with the US Navy in the 1970’s.

A memorial service for Chris will be held 1:30 p.m., Saturday, October 26, 2019, at the Veazie Congregational Church, 1404 State Street, Veazie, followed by a reception at the church. Condolences to the family may be expressed at BrookingsSmith.com
Read Less

We encourage you to share your most beloved memories of Christina here, so that the family and other loved ones can always see it. You can upload cherished photographs, or share your favorite stories, and can even comment on those shared by others.

Posted Oct 05, 2019 at 04:57pm
With sadness and prayers for Christina"s passing. You Joel and all your family are in my prayers.
Bill Lagerstrom
Comment Share
Share via: 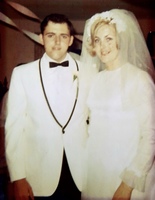