To share your memory on the wall of Maureen Caristi, sign in using one of the following options:

Provide comfort for the family of Maureen Caristi with a meaningful gesture of sympathy.

Maureen was a 1967 graduate of Orono High School. After high school, she graduated from St. Joseph’s Hospital’s LPN program. She continued her studies to earn an RN degree from Eastern Maine Community College. Maureen worked over forty years as a nurse in the Bangor area. She spent the majority of her career as a nurse at Eastern Maine Medical Center on Grant 6 West. Due to poor health, she retired in 2009. She was active in the nurses’ union and worked tirelessly for safe practices for all nurses and their patients.

Maureen enjoyed her friends, family, and living life to the fullest.

Maureen is survived by two sons whom she adored, Anthony Caristi, his wife, Sarah, and her loving grandchildren, Arion and Sofia, of Edmond, Oklahoma, Joseph Caristi and his girlfriend, Jen Kent, of Wheatridge, Colorado; her sister, Marlene Susi and her husband, Frank, of Bangor; nephew Mack, of Washington, DC. Maureen was loved by many cousins and had a special sister like relationship with her cousin, Sheila Tolman, of Mattawamkeag. She was a lucky person who had many friends and several best friends whom she often referred to as sisters of her heart; Sally McManus, Charlotte Nolte, Linda McQuarrie, and June Williams.

In addition to her parents, she was predeceased by an infant son, Daniel.

In honoring Maureen’s wishes, no funeral services will be held. Condolences to the family may be sent to 23 Peruvian Way, Bangor, Maine, 04401, c/o Marlene Susi.
Read Less

We encourage you to share your most beloved memories of Maureen here, so that the family and other loved ones can always see it. You can upload cherished photographs, or share your favorite stories, and can even comment on those shared by others.

Posted Oct 18, 2019 at 11:44am
Dear Tony, Joe, Marlene and family:
We were so sorry to hear of Maureen's passing. She fought a good fight for a long time. She was a wonderful friend, had the biggest heart and gave so much love to everyone. She was a great friend while you guys were growing up always doing fun things to keep you boys busy. I hope you will find comfort in your memories as the days go on and know she will always be watching over you (so you better be good)! I will miss her. If there is anything I can do please reach out to me.
Sincerely,
Sandy, Carroll and Chris McGrath
Comment Share
Share via: 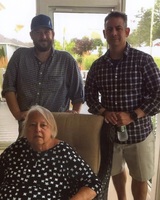