To share your memory on the wall of Christine Sawyer, sign in using one of the following options:

Chris came from a large family of four sisters, and four brothers. She met and fell in love with a young GI, Burton A. Sawyer, who was stationed in Wales during the Second World War. They married in July of 1945 at Bethesda Chapel in Beaufort, South Wales. Chris followed Burt to the United States when he returned in 1946. They were married for 56 years until Burt's death in May of 2001.

Chris was actively involved in the lives of her sons, David and Marc, volunteering often as room mother during their elementary years, and later as chaperone during many Brewer High School band trips. She enjoyed this involvement, and it continued when her grandchildren entered school. Chris was a long time congregant of the First United Methodist Church of Brewer.

In addition to her parents, she was predeceased by her in-laws, Percy and Lillian Sawyer; as well as three of her sisters; and her four brothers, one of whom perished as a POW in the Pacific during the war.

The family would like to express their sincerest thanks to Dr. Gary Ross and caring staff of Brewer Health Center, and the dedicated caregivers of New England Home Health Care, Woodlands Senior Living, Beacon Hospice, and St. Joseph’s Hospital, who made her last years and months as comfortable as possible. At her request, a graveside service will be held at a date to be announced. As Chris was an avid reader, friends are encouraged to make gifts in her memory to the Brewer Public Library, 100 South Main Street, Brewer ME, 04412. Condolences to the family may be expressed at BrookingsSmith.com
Read Less

We encourage you to share your most beloved memories of Christine here, so that the family and other loved ones can always see it. You can upload cherished photographs, or share your favorite stories, and can even comment on those shared by others. 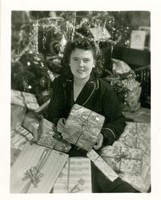