To share your memory on the wall of Elwyn Jackson, sign in using one of the following options:

Elwyn took great pride in his collection of vehicles as well as his properties. He owned several antique vehicles, including his Model A Pickup and Coupe, which he would drive to Katahdin Ironworks (KI) with family and friends. He liked stopping for Chester Chicken and pastries at Elaine’s Bakery in Milo. In his free time, he had many adventures including fishing with his daughter, Sherrie, flying with Ronnie, and taking his antique vehicles to Owl’s Head. Annually Elwyn, his wife, and two daughters would drive the backroads from KI to Greenville on his birthday. Elwyn will be remembered as an outgoing, friendly and generous man with many stories to tell.

Elwyn is survived by his devoted wife of 60 years, Sharon. His daughters, Sherrie Patterson and husband Hal, and Barbara Smith and husband Stephen. He was known as “Bampie” to his grandchildren, Hally and wife Kia, Kimberly and fiancé Jay, Kristin, Jesse and fiancé Chelsea, Jackson, and Katie; and great grandchildren Airianna, Alexis, Autumn, Hannah, Miles, and Collin. He is also survived by his sister, Cheryl Paine and husband Jeff, many nieces and nephews, including a close relationship with nephew Brent Fletcher.

During his illness, Elwyn looked forward to visits with his close friends Alan, Chuck, Jeff, Jerry, Larry, and Mitchell. The family would like to acknowledge the wonderful care from Beacon Hospice, especially Lori and Barry.

Out of respect for the current state of emergency, services will be held at a later date.
Condolences to the family may be expressed at Brookings-Smith.com.
Read Less

We encourage you to share your most beloved memories of Elwyn here, so that the family and other loved ones can always see it. You can upload cherished photographs, or share your favorite stories, and can even comment on those shared by others.

Posted Mar 24, 2020 at 05:18am
Wishing you peace to bring comfort, courage to face the days ahead and loving memories to forever hold in your hearts.

Flowers were purchased for the family of Elwyn Jackson. 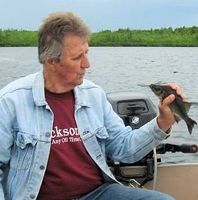