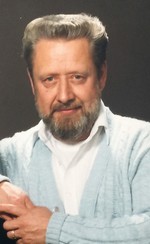 Born 12 Jun 1934 in Tomah, WI, he was the son of the late Edith Marie Becker and Carl Frederick Lenz.

He was also preceded in death by his wife, Sarah Jane and his sister, Carleen Lenz Pearson.

J. R. graduated from Tomah High School in 1952 and in September joined the U.S. Air Force. While stationed at Charleston Air Force Base in ME he met his 1st wife, Ann Ames. They married in 1957 and their 1st son, Barry was born the next year. Between 1960 and 1965, J. R. was stationed in Shillington, Hertfordshire, England. While there, their 2nd son, Scott was born. In 1965, he was stationed in San Antonio, TX; between 1966 and 1969 he was stationed in Pakistan; then from Oct 1969 to Sep 1972 he was stationed in Turkey. He proudly served our Country during the Korean Conflict.

After his stint in the military, J. R. and his family returned to East Corinth, ME. He began working for the Bangor, ME Post Office in 1972 and retired in 1999.

While working at the Post Office, J. R. met his 2nd wife, Sarah Jane Monteith. They married in 1986 and were joined with her sons, Michael Galen and Robert Meservey, whom J. R. thought the world of.

Robert “Dr. Bob” has been his primary caretaker and J. R.’s family is very grateful for all of the tender loving care, compassion and attention that he shared with him in his last 4 years. The family also would like to thank his wonderful caregivers, Candice Grevencamp and Regina Smith, who tirelessly gave of their time, and shared their love and compassion for our Dad. We would also like to recognize the caregivers at Solstice Senior Living and Northern Light Home Care and Hospice.

J. R. is survived by his son, Barry and his wife, Laurie, and grandson, Michael of VA; his son, Scott and his wife, Rosa, and grandchildren Gina, Jennifer and husband Travis, Raven and husband Corey; and Great-Grandchildren Andrew and Aaliyah of OH; Sarah’s sons, Michael and Robert of ME; the mother of his children, Ann of ME; and numerous nieces, nephews, and friends.

In respect to J. R.’s wishes, there will be no funeral service. Instead, have a rum and coke and toast J. R. while sharing your memories of time spent together.

A private graveside service with military honors will be held at Woodlawn Cemetery, Brewer.

In lieu of flowers, please give to one of the Veteran Organizations of your choice in J. R.’s name.

You may leave your condolences to the family at www.brookingssmith.com.