To share your memory on the wall of Richard Hartley, sign in using one of the following options:

Dick attended Bridgewater Classical Academy and graduated from Aroostook Center Institute, Class of 1962. He was a member of Future Farmers of America and served as Chapter President. His work career was spent in the construction industry, a skilled heavy equipment operator, he was known best for his work with Clewley Foundations and had a hand in constructing numerous residential or commercial building foundations statewide.

He was a regular at the counter early mornings at Nicky’s on Union Street in Bangor, sharing laughs with his many friends who gathered there. He was a lifetime member of the Elks Lodge in Bangor, serving as Exalted Ruler in 1976. Dick had a love of harness racing and was involved for over three decades as an owner and breeder. He served on the boards of Maine Standardbred Owners and Breeders Association, Maine Harness Horsemen’s Association. He owned Rajen Ridge Farm in Monmouth and Northstar Standardbreds in Newburgh. His horses won many awards, including Breeder of the Year for Pacers multiple times. He had a great love of farming and agriculture.

What he loved most of all was his family. Married to Linda (Smith) Hartley for 57 years, they had three children, Kelly, Sam and Andy. He was a dedicated husband and father, attending farm and little league games, swim meets and Boy Scouting events. He was a favorite with friends of his children who were always welcomed at his home. The role he relished most was being “Papa Dick”, his grandchildren Mathias, Claire, Josiah and Mason all benefited from his practical life teachings, sense of humor and unconditional love. He took great pride in all their many accomplishments and was generous with his time, his jokes and big hugs. He enjoyed family gatherings, good food, especially pies and sweets and time spent with friends. Everyone, even adults called him Papa Dick.

He is additionally survived by his siblings; sisters, Patty Shubert and husband, Mark, Prudence Nathan and husband, Mike; brothers David Landry and wife, Connie, Gary Landry, Paul Landry and wife, Dera; as well as his extended family of brothers and sisters– in law, nieces, nephews and cousins, who were all incredibly special to him.

A graveside service will be held at Smith Cemetery, Bridgewater, later this summer. Those who wish to remember Papa Dick in a special way can make gifts in his memory to American Parkinson Disease Association, www.apdaparkinson.org or Honor Flight Maine, www.honorflightmaine.org/donations
Read Less

We encourage you to share your most beloved memories of Richard here, so that the family and other loved ones can always see it. You can upload cherished photographs, or share your favorite stories, and can even comment on those shared by others.

Posted Jul 08, 2020 at 03:53pm
Hi Linda and Sam
So sorry to hear of “Papa Dick” passing. I have so many fond memories of your friendship and guidance as I was getting my start in harness racing and breeding. I especially remember a fun trip to Harrisburg and will carry those fond memories forever. Please take care of yourself. If you are up our way, please drop in to visit.

Posted Jul 03, 2020 at 09:43am
Thinking of you Linda... I have so many memories that give me a belly laugh and warm my heart. My love and prayers to you all at this time.
Comment Share
Share via:
PE

Posted Jul 02, 2020 at 09:02pm
To Linda, Kelly, Claire, and Mathias Our Sincere Ciondolences on the passing of 'Papa' Dick He will surely be missed by many
Comment Share
Share via: 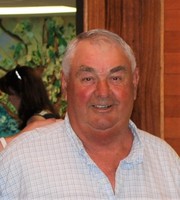