To share your memory on the wall of Suzanne Hart, sign in using one of the following options:

VEAZIE - Suzanne Kay Hart, 74, passed away October 9, 2020, at a Bangor hospital, after a long and courageous battle with cancer. She was born August 6, 1946, in Bangor, the daughter of Gerald F. and Marjorie (Thompson) ... Read More
SUZANNE K. HART

VEAZIE - Suzanne Kay Hart, 74, passed away October 9, 2020, at a Bangor hospital, after a long and courageous battle with cancer. She was born August 6, 1946, in Bangor, the daughter of Gerald F. and Marjorie (Thompson) Hart.

Suzanne graduated from Brewer High School in 1964. She received a BS in political science from the University of Maine in 1968, graduating summa cum laude. She excelled on the University of Maine debate team, making lifetime friendships with her debate teammates. She then moved to Ann Arbor, MI, and enrolled in the University of Michigan doctoral program in political science, completing all advanced degrees but the dissertation. She taught in the criminal justice program at Stockton State College, NJ, before returning to Maine in the late ‘70s. During her career in Maine, she was employed in various public policy and data analysis positions at Medical Care Development in Augusta, The Muskie Institute in Portland, and the Social Science Research Institute and Margaret Chase Smith Policy Center at UMaine.

Suzanne served for close to twenty years on the University of Maine Alumni Board and enjoyed the many friendships and associations made over those years. In 2008, she was named chairperson of the board and dedicated countless hours of service to her beloved University of Maine during that two-year term. In this role, she was delighted to offer the welcome address to new alumni at commencement ceremonies in 2009, as her nephew, Ryan Collins, received his master’s degree. She also served on the Black Bear Board of Advisors (athletics) and supported UMaine’s athletic programs for many years. After retirement from UMaine in 2010, Suzanne continued to enjoy concerts, lectures, receptions, and sporting events at the University. Her friends and colleagues there were always considered family.

Suzanne is survived by her sister, Marilyn Hart Collins and her husband, Tom, of Augusta; nephew, Ryan J Collins and his wife, Danielle Sullivan Collins, of Bangor; niece, Valerie Collins Pellin and her husband, Mike Pellin, of Glastonbury, CT; and cousins, Jill Irey, and Janice Irey Fate and her husband, John Fate, of Michigan. Suzanne leaves her cherished cat, Lily Belle, who meant the world to her and comforted her during her final months. Suzanne was predeceased by her parents. The family owes our deepest gratitude to Barb & Bill Dalton, Sally Spencer, and Cathy Reynolds, for their invaluable help and support during Suzanne’s illness, as well as Dr. Milburn and sixth floor nurses at St. Joseph Hospital in Bangor, and her many other caregivers over the past few years of her illness.

Due to COVID-19, services will be private at this time. A celebration of Suzanne’s life for friends and colleagues will be held at the University of Maine in 2021.

Suzanne will be a proud Black Bear forever. If you wish, donations may be made in her memory to the Suzanne Kay Hart ‘68 Fund, University of Maine Foundation, Two Alumni Place, Orono, ME 04469-5792 or online at umainefoundation.org/memorial.
Read Less

Print
Services will be private.

We encourage you to share your most beloved memories of Suzanne here, so that the family and other loved ones can always see it. You can upload cherished photographs, or share your favorite stories, and can even comment on those shared by others. 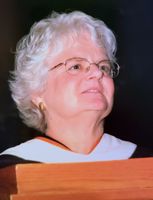