To share your memory on the wall of Barbara McLeod, sign in using one of the following options:

Print
Holden – Barbara Jean McLeod, 64, died unexpectedly, January 16, 2021 at a Bangor Hospital. She was born in Bangor on April 15, 1957, the daughter of James and Eleanor McKenzie.

Barbara was a wonderful wife, mother, daughter, and gran... Read More
Holden – Barbara Jean McLeod, 64, died unexpectedly, January 16, 2021 at a Bangor Hospital. She was born in Bangor on April 15, 1957, the daughter of James and Eleanor McKenzie.

Barbara was a wonderful wife, mother, daughter, and grandmother.

She was pre-deceased by her mom, Eleanor McKenzie.

Barbara is survived by her husband of 42 years, Ralph McLeod; her only son, James McLeod and his wife, Christina; her father, James McKenzie and his girlfriend, Judy, and her brother, Jimmy McKenzie and his wife, Nona; two sisters, Karen Bailey and her husband, Fred, and Susan McKenzie; grandchildren, Roman and Bretton; special granddaughter, Jacqueline Cox; step-mom to Danny and special mom to Roman Vyskocil IV; Brother-in-law, Denis McLeod, and special cousin, Kathy Gaudet.

Those wishing to remember Barbara in a special way may make donations in her memory for her grandchildren’s education fund, P.O. Box 513 Holden, Maine 04429.
Read Less

We encourage you to share your most beloved memories of Barbara here, so that the family and other loved ones can always see it. You can upload cherished photographs, or share your favorite stories, and can even comment on those shared by others.

Posted Jan 21, 2021 at 07:37pm
Ralph and Jim, family and friends my condolences to your loss of Barb. I am shocked. She was one sweet lady. Best to all.
Comment Share
Share via:

Posted Jan 20, 2021 at 07:30pm
Ralph, John and i are so sorry to hear of Barbara's passing. Our thoughts and prayers are with you and your family. Denise McGrath
Comment Share
Share via: 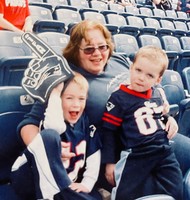