To share your memory on the wall of J. Foley, sign in using one of the following options:

Provide comfort for the family by sending flowers or planting a tree in memory of J. Foley

Provide comfort for the family by sending flowers or planting a tree in memory of J. Foley

Print
J. Edward Foley III passed away quietly, with his life partner at his side, and his son, mother, and extended family and friends close to his heart, on May 29, 2021 in Tiburon, California. He was 69.

Jim Foley was born in Bangor, Maine ... Read More
J. Edward Foley III passed away quietly, with his life partner at his side, and his son, mother, and extended family and friends close to his heart, on May 29, 2021 in Tiburon, California. He was 69.

Jim Foley was born in Bangor, Maine in 1952 to Beatrice Foley Tibbetts and John Edward Foley. He attended the University of Maine where he studied American History and was a member of the ski team. During his 30-year career as an investment banker with Jones Lang LaSalle, J.P. Morgan and Bentley Securities, he lived in Houston, Amsterdam, Los Angeles, and San Francisco. When Jim moved to San Francisco for the first time, from Houston, he took with him a 30-foot sailing yacht to properly explore the Bay Area.

A friend from his early years as an investment banker recalls Jim in his early 20s as a “self-confident, mature, and debonair chap.” Always the snappy dresser, many thought that Jim had a striking resemblance to James Bond (the Sean Connery version). But his signature grin was always uniquely, Jim Foley.

After retiring from banking, Jim followed his dream to become a ski instructor. He taught adult skiing at Squaw Valley, and later for Vail Resorts at NorthStar in North Lake Tahoe. His love of the outdoors and athletic endeavors was boundless. He was in his element sailing, camping, hiking, skiing, canoeing, biking, hunting or wherever the next adventure might take him.

He was an active member of the Montgomery Motorcycle Club — riding a Ducati Multistrada 1000S DS, touring Northern California with his fellow members who described him as a “gentleman on and off the bike”. He was a member of the Westminster Kennel Club for more than two decades, volunteering at the annual Westminster Dog Show in Madison Square Garden, and always inviting friends to share his nearly front row seats on the floor. His beloved dog Champ was a fixture in his life, his photo prominent on his desk and his phone screen long after Champ passed away. Jim also volunteered for many years at the Marin Audubon Society.

Jim was a devoted father to his son, Austin. When he returned to San Francisco from New York in 1999, he coached Austin’s soccer team and attended his sports and academic events through-out his childhood. He shared with him all the aspects of life that he loved, including watching the Boston Red Sox, the New England Patriots, and professional car racing.

He stayed in close touch with his family, and many friends. Whether in Maine or on the West Coast — what a gracious and generous host he was. In July 2017, Jim and Lori Sherer, his long-time life partner, brought together their extended family for a three-day fete in Maine to celebrate their commitment to each other. Jim had been diagnosed in January 2017 with an incurable disease, idiopathic pulmonary fibrosis. However, Jim and Lori kept this information close because they wanted to continue living normally, and without a lot of attention on his illness. Together they were determined and deliberate about doing many of the things they wanted to do while Jim was still healthy. They spent time with family in Maine and Massachusetts, traveled together to Ireland, and London, and then with all four of their kids across Europe to Rome, Florence, Zurich, St. Moritz, and back to London to celebrate New Year’s Eve in 2019.

Jim was an avid reader and history buff (some call him a walking encyclopedia). Gregarious, with the gift of gab, he was always ready for a good debate. Engaging with integrity and intelligence, Jim relished being the intellectual sparring partner with many friends of differing political views. In his company, there was always laughter, and something new to learn.

These last few months were tough for Jim, but he never complained about his situation, and looked out for the feelings of his family right to the very end. Jim is survived by his life partner, Lori, his son, Austin, his mother, Beatrice Tibbetts, his brother, Mark Foley, and sister Diana Rose, and his honorary stepchildren, Jake, Annie, and Katherine Sherer.

The funeral this weekend in Mill Valley can be attended virtually through Zoom details below:
Fernwood Cemetery is inviting you to a scheduled Zoom meeting.

We encourage you to share your most beloved memories of J. here, so that the family and other loved ones can always see it. You can upload cherished photographs, or share your favorite stories, and can even comment on those shared by others. 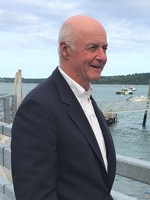