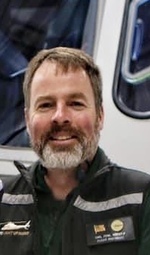 Carl Robert Zenk, age 51, of Otis, Maine passed away on May 13, 2022. Carl was born in Sheboygan, Wisconsin on December 15, 1970, to Jane and Joe Zenk. He was raised in Sheboygan and graduated from Sheboygan South High School. He was a paramedic in the U.S. Army stationed in Huntsville, Alabama. Then, while he worked for HEMSI and MedFlight in Huntsville, he earned a degree in Public Safety
Administration from Athens State University. He enjoyed skiing and hunting and was excellent at building and fixing things. For 15 years he was a
respected flight paramedic, instructor, and base manager for LifeFlight of Maine in Bangor.
Carl is missed and mourned by his parents, his wife Rebecca Zenk, his children William McDonald and wife Jocelyn, Laura Zenk, and Jackson Zenk, his step-children Hannah Jones and Allie Jones, his sister Martha Zenk, her spouse Andrea Szeto, and their child River. A private service will be held.
Condolences to the family may be expressed at BrookingsSmith.com.